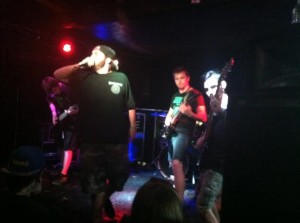 For only $15, which was incidentally a total steal, I got to check out five great bands at New Brookland Tavern in Columbia, S.C. I spent the evening rocking out with Ritual Oblivion, Robot Plant, Cane Hill, The Plot In You and The Acacia Strain.

First up was Ritual Oblivion (great name), who had great energy along with a unique sound, including some quite unexpected pig squeals. After they played, I was able to talk to their bassist, Zander Chapman, of the band, who had a pretty gnarly looking ear. He had gauged his ear up to two inches in the period of only six months, and managed to rip his left ear which he said “wasn’t that bad,” although I beg to differ.

Next up was Robot Plant, who had great rhythms and killer guitar riffs. I had never heard the third band, Cane Hill, before, but I fell in love with them. They had a really high-energy opening with awesome breakdowns. The lead singer, Elijah Witt, was all over the stage. They were the unexpected highlight of the show. Once I had an opportunity to talk to the guys, I found out that the band is named after an asylum. You might think these guys are crazy the way they jump around on stage, but off stage they were actually very sweet and loved talking to their fans.

The main draw for this concert was the fourth band to rock the tavern, The Plot In You. They were very theatrical as they walked on stage with black body paint, ripped shirts and crazy-high energy. They were a crowd favorite.

Our Brief Interview with The Plot in You:

What inspired the lyrics?

Landon: A lot of things inspired the lyrics. It ranges from growing up and experiences to hatred and problems I’ve faced.

Do you only expect pretty guys in the band? Because you’re all gorgeous.

Landon: Exactly. If you’re ugly, you’re out.
Josh: Unless you’ve got a nice ass.

All: It was definitely cool and different.

You guys are the reason I came to this concert. Why’d you chose to join this tour?

Landon: Well, we received an email and there were other cool bands going so we figured, why not?

Is there anything else you’d like to have included in this interview?

Landon: No (laughs).
Ethan: Just that there is new music is coming soon.

Now, let’s not forget the headliner here: The Acacia Strain. It seemed like everyone came to see this band from Chicopee, Massachusetts. This doom metal band started in 2001 and is still screaming their way around the world. And at the show in that little venue, they packed the house. The pits were aggressive and covered roughly the whole floor. They created mystique with some creative song openings. The Acacia Strain was big on crowd participation as they soaked the crowd with bottled water and passed the mic to fans so they could sing along.

Vincent, the lead singer and founder of the band, professed his love of moshing. He related it to legally being allowed to punch someone in the face to relieve stress. Therefore, he said that he “loves New Brookland Tavern because of how it is and forces people to be close.”

The crowd chanted for more when the band left the stage, screaming their heads off for another song. And they obeyed. The Acacia Strain played one more song for us, with Vincent ending the set with a silent “thank you” gesture to the crowd.