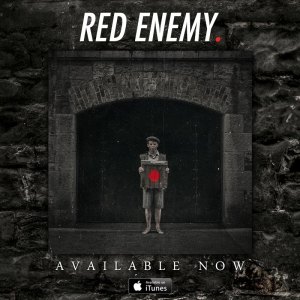 Red Enemy has set the bar extraordinarily high for themselves with the release of their new self-titled album. The album, without a doubt, has the energy, rhythm and vocals that every metalcore fan has come to expect.

The first track, “Blind Eyes,” is a strong opening with such power behind the guitars, drums and vocals that it’s impossible to remain unaffected. It’s a short track (barely over a minute), but even in that timespan, you’ll be shaking your head or punching the air.

Another great track is “Demons,” which I can perfectly imagine a crowd moshing to, given the combined energy of the drums, guitar riffs and vocals. “Demons” opens with the line “get rid of your demons,” fittingly so, since the music will make you want to thrash about like you’re being exorcised.

The best track, however, is easily “Grave Seekers.” It’s a dynamic song with solid, heavy breakdowns and even a bit of clear singing—listen out for it starting right before the four-minute mark. “Grave Seekers” definitely sounds like Red Enemy is channeling Parkway Drive, specifically the sound from their 2012 album, Atlas. But in Red Enemy’s favor, having the music in your first album remind fans of a highly successful band’s fourth album is hardly a bad thing. If anything, it means you’re certainly on the right track.

One thing Red Enemy was very successful at over the course of the album was ensuring that every track had its own sound. It’s easy for a band (especially in a debut album) to get complacent, rather than try out new things. After such a strong debut, I’m sure that a lot of metal fans will be curious to see what Red Enemy comes out with in the future.