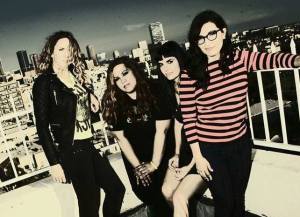 No Apologies scored a tell-all interview with the members of Go Betty Go who dish about live shows, reuniting and their recently released EP, Reboot.

You ladies reunited after a long hiatus and then reformed the band again, hence the name Reboot for the new EP.  I know you continued to play music and toured with The Dollyrots but did you miss performing with Go Betty Go? How did it feel the first time you ladies played together again after such a long break?

AIXA: Of course I missed playing with GBG, this band is my baby and we’ve all been so dedicated to it. When we first got back together it felt like the last time we played together. It’s unbelievable, but it honestly felt like no time had gone by!

AIXA: I’ve fallen off stage a few times, because my drum throne was too close to the edge. I quickly got up and did my best to play it off! But worst than that was one time during sound check I thought there was more room on the stage and I literally walked straight off and fell about 3 feet. I didn’t get hurt; I just couldn’t stop laughing!

What three things are a must have when you go on tour?

AIXA: My dog! Makes me feel like I never left home. iPad, it’s information at your fingertips and you can’t go wrong with that! Sleeping bag-you never know what icky bedding you may come across and you want to make sure you have a comfy, clean place to sleep in.

Any final comments or last words? And where can your fans keep up-to-date with Go Betty Go online?

AIXA: We’re super excited that after so many years, we finally have new music out and we’re very happy with our new EP Reboot.  We’re be playing lots of shows, so check out our Social Media for what we’re up to next!

How did you learn to sing? Were you taught professionally or did you teach yourself?

NICOLETTE: I started teaching myself songs at the age of sixteen when I picked up the bass. A year later I began to write lyrics and sing with Aixa and Betty. I had taken a private lesson and a community college course but was basically self taught until we were signed by Side One Dummy. It wasn’t something that came easy in the beginning. I had to work really hard at it. Being on stage is thrilling and I knew I loved it but I needed to earn my place there, and that didn’t happen until I took private lessons with Wendy Parr. The lessons would take place in a large piano room that seemed to be a kind of back house to a mansion in Hancock Park. Her methods were bizarre but they changed me. I was able to find my voice after just a few lessons. She was expensive but worth it.

How did you all meet and decide that this was what you were going to do for a living?

NICOLETTE: At a very early age my sister and I fell in love with Rock and Roll music. We’d make guitars out of cardboard and use pencils as drum sticks. All of our friends at one point or another were dragged into our games of rock and roll band. Eventually we learned how to play real instruments and got every punk CD/tape we could get our hands on. We’d invite all our musician friends to come over after school and jam with us and one day one of those friends brought over Betty who lived two blocks away and played a mean guitar. We instantly fell in band love and started writing songs.

Aixa would have little goals that she’d want us to achieve. At first it was all about writing enough songs to create a 20 minute set. Then we all put our money together and bought a PA for the vocals. Then we’d try to get gigs. Our first show ever was playing at my cousin’s 10th birthday party. It was never about money; we just loved playing music together and wanted to be taken seriously.

How did you come up with the name “Go Betty Go”?

NICOLETTE: It was something that we found ourselves saying when trying to get Betty to start a song. I was also going through a Bettie Page obsession. It just felt perfect for us so we went with it.

Do you mind taking about your relationship status?  Rumor has it that guys in bands tend to get hit on a lot. Do you think the same goes for female artists?

NICOLETTE: Women in bands get hit on probably just as much as men but the way they get hit on is different. Men get offered sex, women get offered invitations to Coachella and the chance to have your oil changed. You gotta up your game when you’re hitting on a girl who’s got a pocket full of drink tickets. My boyfriend knew this very well.

You have a new 6 song EP called Reboot. Tell us about this release. What inspired the title/concept? How does it differ from your other releases?

NICOLETTE: This is our first record since we’ve reunited. It explores our slightly more mature dark rock side. We wanted to go with a tittle that expresses the rebirth of our band without sounding overly dramatic. I work as an art director designing movie posters, and one day the electricity had gone out and we all had a little down time before it came back. I took this moment to try and come up with the EP’s title. Reboot hit me when I realized our computers were coming back to life and we were ready to get back to work.

Your songs “Cemetery Stone” and “It Haunts You Now” are said to be two of your darkest, deepest songs. Can you tell us a little about those songs, what they mean, what inspired them and what they were about?

NICOLETTE: Unfortunately we still live in an age where there is violence towards women. In “Cemetery Stone” I’m abstractly telling a story of a man who’s being interrogated for killing a Mexican girl. It’s not about a specific case but in a way it’s about all of them.

What would you like for your fans to get out of your music? Would you say you are trying to empower women?

NICOLETTE: I try to set a good example by showing strength and confidence. Rock and Roll is all about releasing energy and expressing one’s thoughts through body language and words. I love the idea that we might be inspiring other girls and women to pick up a mic or instrument and do the same.

NICOLETTE: It’s intimidating to go from playing small shows to all of a sudden being in front of a huge audience. When we first played the Roxy back in the mid 2000s I had the experience of forgetting all the lyrics. Stage fright is real and it sucks. I cried in the car all the way home.

NICOLETTE: People come from very far away to see us play and I always love to hear about the adventures they come across trying to get to us. This one guy said his car got caught in a snow storm and had to spend the night trapped inside.

What three things are a must have when you go on tour?

What is it like to play in front of a big crowd for you?

MICHELLE: To play in front of a huge crowd is a mixture of emotions all at once.   I’ll feel excited, nervous,  happy,  anxious,  maybe a little scared but as soon as we go on an adrenaline rush definitely kicks in and it’s just fun.  The nervousness goes away and it’s exciting all throughout the set.  It’s weird because I kind of feel the same even when it’s a small intimate crowd/venue.

MICHELLE: I can’t really think of an embarrassing moment in stage. I haven’t fallen or anything (knock on wood). Maybe just a mess up that was pretty noticeable.

MICHELLE: I had a fan in Dallas jump on stage and kiss me on the cheek.  Not sure if that’s really crazy, but our roadie Shawn was not having it and grabbed the guy off the stage.

What are three things you have to take on tour?

MICHELLE: Books/Movies/Music, a good pillow and plenty of underwear.  You don’t really know how long it’ll be between each laundromat.

MICHELLE: This last question is pretty hard but right now the album that comes to mind that I love is The Cure’s Standing on a Beach: The Singles Collection.  Each song is so good. I love anything by the Cure. I love Robert Smith.

You’ve been on tour before and traveled several places. Where was your favorite place to travel/play and why?

BETTY: First place that comes to mind is Switzerland. That place is just too beautiful. My time there was limited, but the memories I’ve brought back home are forever and that’s amazing. The people treated us great and at night, when it was time to play the show…they didn’t disappoint. One of the greatest nights ever, for sure.

BETTY: There have been some embarrassing moments on stage, but nothing major that I can think of. I think what’s happened to me, happens to a lot of musicians at some point. I think! One time I was in the middle of playing a song and rocking out as hard as I could and I stepped on my guitar cable. My foot slipped, causing me to practically do the splits. I went from thinking I looked cool, to obviously looking terrified! Another time, I was again playing hard in the middle of my song, then came up to sing my back up, getting punched in the face by the microphone instead. That must’ve looked “real cool.”

BETTY: We have a fan from our early years who got a tattoo of our band logo. I thought that was pretty crazy, because I wouldn’t even get my band’s logo tattooed on me.

What three things are a must-have when you go on tour?

BETTY: I think it’s different for everyone. But for me, number one is MUSIC! Number two is my pillow. And number three is my phone/contact list. There are a lot of important things to take on the road, such as your toothbrush, jackets, shoes etc., but you can buy all that on the road if you forget them.