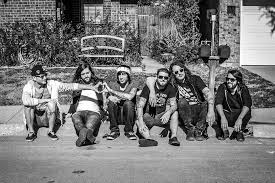 Down to Friend, a six-piece conglomerate of musicians, singers and growlers, have come together to create the perfect music for your next house party. From pizza to metal to New Found Glory-remnant vocals, these dudes know how to let loose and have a good time. With their huge fan base following their debut EP, So Awesome It’s Stupid, and an upcoming single, “Unauthorized Party of Destruction,” due out on the 23rd of this month, they show no signs of slowing down.

So Awesome, It’s Stupid is the title of your new EP. How did you come up with that title, and for that matter, how did DTF (Down To Friend) become your band name?

Well, we are a very crazy, funny, party group of guys and we wanted our album name to be funny as well as badass. So we figured it was “so awesome, it’s stupid.” Our band name came from all of us spitting out ideas, and we really wanted a funny acronym for it. Our guitarist Roger said, “What about Down To Friend?” And we were like, “It’s like ‘down to fuck,’ but a lot more friendly.”

There are so many of you! Is it tough to rehearse, plan shows or write songs? Or do you all hang out with each other anyway?

Most of us live around Dallas, TX or just outside of it at least. We practice twice a week, every week, but most of us actually hangout with each other on our free time as well. We’ve all been great friends for a long time.

The music video for “I Forgot The Weekend” is on point. Who helped put that together for you guys? Also, Barrel Roll, Peppy from Star Fox?

The “I Forgot The Weekend” video was a ton of fun to make. We had a blast. We wanted our video to reflect who we really are. And we really do party HARD. Our great friends at Elynia Productions made the video for us and they were just an excellent group to work with. We have since become great friends with them and get together all the time. And yes, “DO A BARRELL ROLL” is from Starfox 64. We are Nintendo 64 addicts.

How has working in a big studio compared to how you guys usually record?

Working in a big studio was amazing for us. It just ran so smoothly and came together very easily without distraction, worry, or hassle. Geoff Rockwell is an AMAZING producer and we could not have asked for anyone better. We are currently working on a lot more material with him now, actually. We are so excited about it too.

Is there anything you can tell me about the soon-to-be-released single, “Unauthorized Party of Destruction?”

Well, “Unauthorized Party Of Destruction” comes out on Sept. 23rd and all we can say is that it’s PARTY AS FUCK! We have worked very hard on this track and we are experimenting with different things to throw in the mix, and will continue experimenting throughout our next few singles. We are very excited to see the direction that DTF moves in.

We LOVE pizza! It is the official food of DTF. We probably eat it way more than we should. And The Ninja Turtles are just awesome.

When you guys aren’t at a party, what is something awesome you do? Watch Netflix? Knit?

When we aren’t at a party? Hmmm…we’re always partying. Life is a party and we enjoy every minute of it. But we also like video games, grilling, of course Netflix, and can’t say that we’ve ever tried knitting before, but we’ll try anything twice.