This Saturday I discovered the hidden mecca of hip and urbane in Columbia. A double bill performance at Tapp’s Art Center on Main Street drew a large audience of artsy folk, young and old—think turtlenecks beneath leather jackets, pinot grigio in clear plastic cups and small city meets cosmopolitan, in the best way possible.

The first act of the night, the Spork in Hand Puppet Slam, was hosted by a sardonically comical duo known as Jenny Mae and Cornballz. Accompanying their narration was the psychedelic-electronic band, We Roll Like Madmen. Had it been a different scene, the music would have inspired the room to grind and bump to their chillstep mixes, which featured both the rich soundscapes of vocalist Jordan Young and heavy beats dropped and manipulated by Chris Tollack on synth.

But I didn’t attend Tapp’s to people-watch or jam out, though both desires could be easily sated. The second act of the evening, the final work of Kimi Maeda’s trilogy, “Ephemera,” is what brought me downtown. The live performance, entitled “Bend,” utilized sand, light and film projection to narrate the tale of Maeda’s father’s experience in Poston, a Japanese internment camp during the World War II.

“Bend” discussed Asian Art Historian Robert Maeda’s research on sculptor Isamu Noguchi, who voluntarily lived in the same internment camp Maeda lived in as a young boy. The performance simultaneously addressed the struggles of Japanese-born Nissei and their children during an era when anti-Japanese sentiment was promulgated. Uncle Sam drawn in the sand on stage and projected on screen, juxtaposed with images of bombings, called to attention the gravity of politics’ relationship with racial identity. In a stark comparison to the laughter induced by Act I, Act II confronted the past and its relation 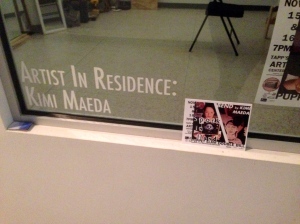 to the present, as well as the impermanence and fragility of the mind. Soft spoken and incredibly down-to-earth, Kimi was gracious enough to spend a few minutes chatting with me before the performance began.
“It relates to this idea of memory, and forgetting, and things shifting,” she told me about her act.

“Ephemera,”showcased in Tapp’s for the entirety of November, includes a variety of projections, along with a number of works focused on the written word. She explained, “All of these pieces are about my family; all of these deal with me growing up as a Japanese-American in New England.”

“Homecoming,” a piece that invites viewers to interact with the work via flashlight, evokes the fleeting images of changing seasons. Such intimacy in Maeda’s work is touching and especially bold in its direct confrontation of both race relations and also the delicacy of memory, specifically her father’s dementia. Recordings of his voice were heard during “Bend” while she maneuvered around the stage, drawing his portrait in the sand. “We always knew he had memory issues,” she explained, “but during the course of development of this piece things just got much worse, so that’s been tough…it’s also really helped me in dealing with what is going on.” Knowing this before watching her performance only heightened the intensely personal nature of the act. Maeda verbalized the therapeutic essence of her presentation: “The past is always shifting and it’s falling away from us, but as an artist you’re struggling to create, and that’s the way you deal with that.” Such soliloquies captured the pragmatic character of her as an artist.

When asked about what music she currently listens to, she smiled, “a lot of Kishi Bashi,” who was included in the production of “Bend,” along with Bill Carson and Those Lavender Whales. In the spirit of No Apologies, I inquired about her shameless obsessions. “I’m probably a workaholic,” she laughed, “I’m obsessed with work…the Serial Podcasts right now, I’m kind of obsessed with that. And podcasts in general. I find them very good to work to.”

Though the exhibit “Ephemera” will be displayed in Tapp’s for the remainder of the month, “Bend” was a weekend feature performance. Shorts teasers of the act can be found on Vimeo, and Kimi’s portfolio is available for viewing on her website, http://www.kimimaeda.com.