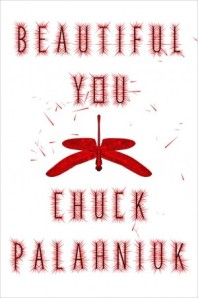 I read Fight Club when I was fourteen years old and for years I could not get enough Chuck Palahniuk. I read all of his novels and poured over his essays on writing. I even joined “The Cult,” a fan site dedicated to everything Palahniuk. But as time went on, his wildly dystopian plots and miserable characters became harder to swallow, and each increasingly disappointing novel pushed me away from my fandom. I thought all was lost after reading 2011’s Damned, a book so awful that I didn’t even bother buying its sequel, Doomed.

Convinced Palahniuk had lost his charm as an author, I was pleasantly surprised when he published several excellent short stories in 2013. I fell for his masterful, minimalist prose all over again after reading the short “Phoenix.” “Is he back?” I wondered. “Has the king of nihilistic weirdness returned to his throne?”

I hoped so and decided to give him one more chance with Beautiful You (Random House, 2014). I opened it with trepidation — hopeful, yet full of doubt.

The novel begins with the horrifying public rape of Penny Harrington in a courtroom. Indifferent witnesses watch the terrible spectacle unfold before them, snapping pictures and recording video on their mobile devices. When paramedics arrive to help the victim, they recognize her from tabloid stories as “the Nerd’s Cinderella.” As they work to stabilize her vitals, they criticize her for not marrying the “Nerd,” C. Linus Maxwell, affectionately dubbed by the media as “Climax Well.”

Palahniuk then shifts us back in time, where we meet Penny before the rape and before Maxwell (this framing device is typical of Palahniuk’s writing). Penny is a would-be lawyer whose failure to pass the bar exam several times has relegated her to being a lowly legal assistant. As she fetches coffee for the powerful male attorneys she works for, she ponders the dichotomy of the female personality (Madonna vs. whore, lawyer vs. housewife, etc.). She tries to convince herself that this is the best time in history to be a woman. Juxtaposed brilliantly with the opening scene, readers easily join her in questioning the validity of that claim.

When she returns to the law office, she stumbles into Maxwell. In spite of her spilling coffee all over him, he still finds her charming and invites her to dinner. Their relationship quickly turns sexual. Penny is so entranced with Maxwell’s strangely clinical sexual prowess that she gives up everything to make herself entirely available to him. Penny becomes addicted to the pleasure Maxwell delivers and spends 136 days as a willing hostage in his bed, even after she figures out he is only using her as the final test subject for a line of sex toys he has spent years developing.

Then Maxwell abruptly ends the affair and sends Penny on her way. When the Beautiful You line of bedroom toys debuts to enormous profits, Penny decides to take legal action against Maxwell to reap her piece of the profit pie. As she prepares to file suit, the first female president of the United States shows up to inform her that Maxwell plans to enslave the women of the industrialized world. The President begs Penny to forget the lawsuit and says she must instead climb Mount Everest to find a sex witch named Baba Gray-Beard who has the only means to stop him.

And then, things get really weird.

With the introduction of Baba Gray-Beard, Palahniuk totally abandons the early themes that held so much promise. Instead, he leads us on a nonsensical, desultory tale with no redeeming moral anywhere in sight. The incoherent ending insulted rather than inspired me, and I walked away from the novel confused and dissatisfied.

I really wanted to like Beautiful You, but it’s Palahniuk’s worst work to date. I recommend steering clear of this one.