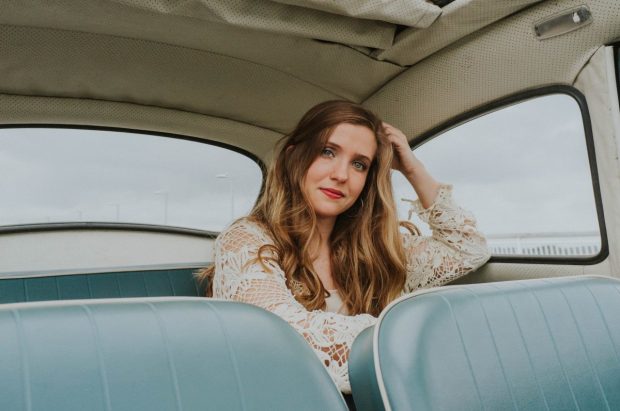 Born and raised here in South Carolina, Becca Smith was only 8 years old when she put pen to paper and wrote her first song. After a flurry of performances through her high school and elsewhere, Smith took a break for college, but is now returning to music in earnest with her debut album I-26.

The album is loaded with Lonestar country, taut with melodies both upbeat and somber, laced with withdrawn, intimate lyrics. “The Murder Ballad of Francie Lou” certainly hones in on those storytelling skills with a Bonnie & Clyde-esque outlaw couple on the lam. The song’s signature piano is played fast and loose as if a saloon player has just downed his third shot of whiskey, and the additional musical accompaniment just follows suit.

Tracks like “This Way” lean on harmonies and bright acoustic plucking as the scolding and forgiving love song reminds the listener of how forgiving and blinded we can be when we love someone to the point of stupidity and believe them when they say, “I was always this way.” The emotional sincerity and real chemistry of the singing here is reminiscent of The Swell Season.

Switching gears, “Let The Kids Out” talks about the underlying issues of troubled kids. Smith croons like a self-assured folk singer, “Everyone can make a change…whose to say we aren’t all insane.” The sentiment leans toward that cold hard truth of the world we live in and reminds me conceptually of Jewel’s 1998 “Hands”.

Her overall effort was awarded “Singer-Songwriter of the Year” by Charleston City Paper last year, and for good reason. She might very well be that artist that gets off of I-26, out of this town, and into the national spotlight.

Ashes Of Old Ways – From the Ashes

Folly Beach fostered the development of 6-piece band, Ashes of the Old Way and it shows. Between smoky guitars and vocals that meld as a tasteful thread into the blanket of their fierce but laid back classic rock-and-roll approach you can’t help but place yourself at a beach bonfire.

Their 3 part harmonies are the highlight of tracks like “Cover Me” and are a common thread throughout their catalog. With an acapella intro that hooks the listener from point one it can only be embellished with long guitar solos. Lyrically laying out a map of metaphorical journeys over mountains with a devil on their back, “So long I’ve been riding alone/So long from the way it used to be”. Overall it begs their love to be there to take care and cover them when internally they are falling apart.

The heartbreak theme continues with “Jackie Wants a Black Eye” which reaches a knife turning conclusion, “We’re all in this together as we all fall apart…swallow little pieces of our broken heart” but the overall live delivery is enthralling and exciting in it’s own right.

“High Time for a Change” follows more along the country vein with layered steel guitar and acoustic locomotive acoustic. The devil doesn’t quite go to Georgia but between the: showcased falsetto, harmonies, Emma Kate Mclain’s feature, and the dusty Oregon Trail musical viewpoint it would be strange if you didn’t in your minds eye see horses kicking up dust.

Overall, Ashes of the Old Way are at their brightest when performing live which is evident with their recent television performance for Columbia’s ABC “Lowcountry Live”. Whether diving into their 2016 self-titled, self-released album or indulging in their latest releases you should definitely invest in a ticket to one of their shows.

Find It: Ashes of Old Ways