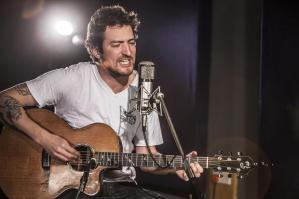 Frank Turner won’t sit down and won’t shut up, even after being in the music business for thirteen years. The 32-year-old punk-folk musician is just as relevant as ever with his latest release Tape Deck Heart.

The first time I heard Frank Turner was live in 2010 when he opened for  Flogging Molly at Baltimore Maryland’s Ram’s Head Live. I was instantly  mesmerized and so was the person with me, coaxing me out of my front row  stance to get an autograph. I found out later that he was convinced Turner was  the main act. Obviously my companion wasn’t the most educated on Flogging  Molly, but one thing was for certain: Turner stole the stage.

Four years later and Turner is still churning out whiskey-sippin’, poetry-saturated tracks that hook the listener from the first note.

“I guess it’s kind of a break up album,” he says, “most of the songs center on the difficult ending of a long relationship I’d been in.” The evidence of that sentiment is strewn throughout the album.

The fierce complaints for understanding pierce in the album opener “Recovery” (“Blacking in and out in a strange flat in East London/Somebody I don’t really know just gave me something/To help settle me down and to stop me from always thinking about you”).

“The Way I Tend To Be” vocally swells with a yearning for reconciliation behind melancholy guitar chords (“I stand alone in airport bars/and gather thoughts to think/That if all I had was one long road/It could drive a man to drink”).

The faltering emotions are achingly present in “Anymore.” The song whispers with simple acoustic guitar and is the album’s quietest listen. 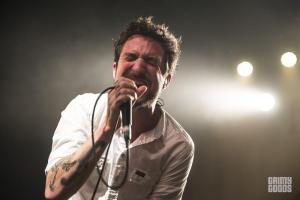 Tape Deck Heart has its fun moments, too. “Polaroid” touches on the fleeting moments of Turner’s long standing career.

“For me personally, the level at which I do things has changed—I have a lot more crew now and generally don’t sleep on the floor,” Turner comments playfully.

The album as a whole shows maturity, yet acknowledges the ever-present longing for days past.

When questioned about his most beloved venues, Turner mentions London’s original Nambucca (which was ran by friends until it caught fire in 2008 and has since been reopened under new management), New Jersey’s Ashbury Lanes and Washington D.C.’s 9:30 Club.

For his live show ritual, he says, “I drink a few pints of water straight after I get off stage. It helps my voice and my general physique. Staying healthy and in shape on tour isn’t the easiest thing in the world. Then I generally shoot a Jameson whiskey.”

When it comes to live shows, Turner never disappoints, bringing intensity and sincerity to each performance. In many ways he is still the young guy who got his first tattoo of Iron Maiden.

With an upcoming UK tour that includes fifteen shows and dates scheduled well into 2015, it doesn’t seem like Turner is going to slow down anytime soon.

Turner’s final thoughts during our interview? Through a chuckle he remarks, “Final? I’m not done yet.”