While talking about fashion and androgyny, or better yet, androgyny in terms of fashion, we tend to have a stereotypical view on it. Most of our minds automatically race towards images of women in pants or any wearable that is quintessentially male, be it pants, oxford shoes or blazers, or even short hair or suspenders.

Androgyny is not a gender-specific term; however, it still has a stereotype attached to it that androgyny means a woman wearing menswear. The truth, though, is that at least when it come to fashion, women are not the only ones blurring the lines between genders. Recent trends have shown that men are participating as well.

Let us take the recently held Gucci show during the Milan Fashion Week, where it practically showcased genderless fashion. Both men and women were wearing the same fabric, cut and makeup. And no, it was not women who were dressed masculine—it was the men who were dressed feminine, in prissy bow ties, silk blouses and similar.

This example is not a one-off show, because this trend is fast becoming popular. And no, this is not cross-dressing. These men are not drag queens, but men carrying off feminine silhouettes with élan. Now some might feel that they are just runway models, and that men off of the runway would never wear such clothing. That suspicion is likely true because most men, even the models themselves, would probably not wear such ensembles in their day-to-day life. Their hesitancy to do so, however, is more because of pressure to adhere to a social norm than because of personal choice. 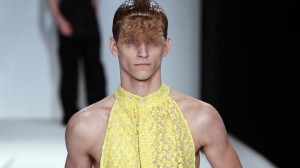 Men who choose to dress in feminine silhouettes are not any less masculine than those who don’t, just like women who wear men’s silhouettes are not any less feminine. The fashion world might have a lot of negatives (among which is an unreal standard of beauty), but it does strive to portray gender equality through stylistic choices that show androgyny as a two-way street.