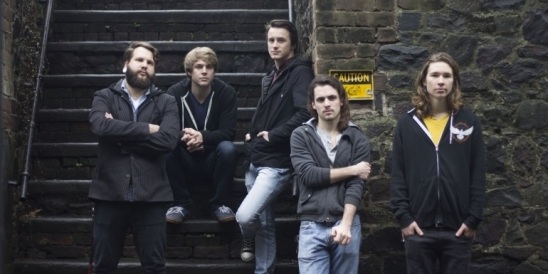 The first time I ever heard The Apprehended play was in an arcade in my hometown when I was fourteen years old. With much chagrin, I recall failing miserably at the “scene” look. Years later, I’ve stopped teasing my hair, and the band, too, has had a makeover. Since their start in 2009, the Beaufort-based quintet has had a few members come and go, and currently are a group of five.  They’ve played at Warped Tour, Rocktoberfest, and their music video “I Dream Of The Past, I Dream Of the Future” has garnered well over 14,000 plays on YouTube. With lyricist and vocalist Michael Pitt, bassist Matt Snow, drummer Joshua Dooley, and guitarists Austin Ramey and Jade Williamson, the post-hardcore band gives their fans a range of passionate soundscapes. Pitt’s vocals, ebbing and flowing between high-pitched to a more smoky and guttural sound, are contrasted by a variety of screams from all members and unrestrained percussion provided by Dooley.

The experimental design is rich, and you’re just as likely to hear a silvery whisper as a raucous shout. Unapologetically brassy and in-your-face, I’ve witnessed the Appre-fellows fill overflowing coffee shops with the singing-along of large, happy crowds, yelling memorized ballads at an outstretched microphone. Kindling much nostalgia for my punk-y, high school years, I jumped at the opportunity to talk to the boys over the phone (who are currently stationed in Charlotte) to discuss everything from Tex-Mex to their close-knit fan base.

So tell me about what’s going on in North Carolina?

Matt: We are recording in Charlotte with Kevin Newland. He’s worked with bands like The Word Alive, Memphis May Fire and Erra.

Michael: We’re recording our 3rd EP. We don’t really have a name for it yet. We’ve got some sick new songs, a new brawl. We’re kind of just taking our time on this one; we’re up here for fifteen days.

How does the stuff you’re recording this month differ from your last album, Defining Home?

Can you tell me anything about upcoming tours?

Matt: As of right now, we have a show December 13th, I believe, in Beaufort. It’s with our good friends, Me and the Trinity. It’s gonna be a living room show, nice, hot and sweaty, up-close and personal. After that, no shows until halfway through January, with Shot Heard Around the World. We’ve known them from about then end of 2010. So it’s a long time in the making with really good friends of ours.

Any chance of a return to your coffee-shop show roots in the future?

Michael: Well, we recently heard of a network of house shows in Charleston, and that got me really excited because we love house shows. Tight, close space, lots of bodies, lots of sweat. Basically if you have a living room or a place to play music, let us know!

What bands or artists are you guys currently listening to?

Matt: I The Mighty, Underoath.

Austin: I’ve been listening to a lot of Coheed and Cambria.

Michael: A lot of EDM type stuff, so pop music, Ellie Goulding…guilty pleasure, I guess. I’ve been listening to Common Courtesy by A Day To Remember, like, a lot; the album is just so hard to ignore.

Jade: I’ve been listening to Mumford and Sons, The Maine and Taylor Swift.

If you could collaborate with any female artist, who would it be?

(All laughing): Aw man, Hayley Williams! Demi Lovato, Lindsey Stirling just for her violin, Lorde, Pink… Any girl who can sing really well, hit us up!

If you weren’t making music, what would each of you be doing right now?

Jade: I probably would have pursued my interest in becoming a pilot.

Joshua: If I didn’t pursue music, I would probably be going into the field of being a vet. Either that…or, well…I don’t know. Music has always been something in my life that I couldn’t live without.

(Others in background): Joshua has no idea what he would do without music.

Joshua: For a few months I’ve thought about being a profile agent in law enforcement, because I feel like I could read people really well.

Matt: If I weren’t in the music industry or anything involved in music, [such as] helping with management, I’d probably be in the culinary field.

Austin: I would probably be investing a lot more time into actually writing. Like novel-wise. Or voice acting.

Michael: I would have attempted college again. Now I wanna be in the video game industry.

Where do you see the Apprehended in five years? Seeing as it’s been just over five years since your start.

Michael: This lineup is really a whole new band. Five years from now I just see us everywhere. (laughter in background) Really, I can’t think of one spot where we’d be. Definitely a nationally performing act.

All: Pizza…Cookout! Burritos of any sort. Qdoba.

Michael: Either Cookout or some sort of fabulous burrito.

I saw a Vine clip of the new studio. Who gets top bunk?

Matt: Jade and Michael kind of spoon on the bottom bunk, Josh gets couch and Austin and I trade off between the floor.

Could each of you tell me something that you’re shamelessly obsessed with?

Austin: Destiny… I’m addicted for some reason. There’s that.

Jade: I am not addicted to Taylor Swift! Sleeping With Sirens.

Matt: Muse. I don’t know why, I’ve just been really into them.

Michael: I’ve been pretty obsessed with the DC superhero Nightwing and basically all the Robins, all of ‘em! They’re just cool…A focus on Dick Grayson, Nightwing. Because he’s got long hair!

Joshua: I have recently been watching a lot of Rick and Morty and I talk about it a lot and I annoy the guys with it, because I think it’s funny.

What do you want fans to take away from this new album?

Michael: These are the most personal lyrics I’ve ever written. I’ve just been spilling it out…Um, this stuff is hard, it’s life. I’ve done at least twenty-four years’ worth of living, and if I’ve got a thing or two to say, if that helps somebody, then that’s the point. With this [album], it’s been talking about the darkest my life has been to date, so if I can come out of it with something, then you can too.

Joshua: As this band has progressed through different members and different sounds, we’ve had a few people [write] to us, saying that we’ve helped them. And I can honestly say that some of the things they’ve said have brought me a tear. I don’t want to put a label on us as a religious band or a band that hates people. I want people to know, hey, we’ve been through so much…and if you ever want a hug, we’re those guys.